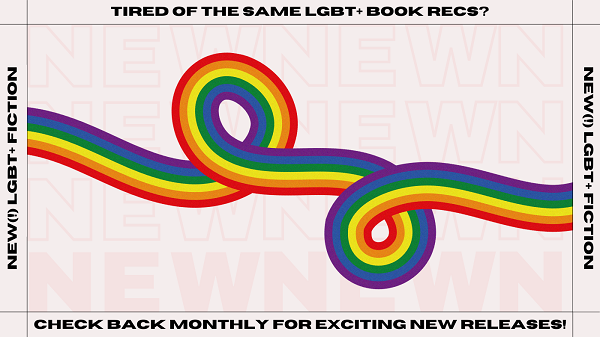 When a bump on the head sends Luis back to 1985, he decides to try to help gay teenager Chaz get his first kiss and navigate homophobic bullies.

Exes-turned-best-friends, Sam and Ros, find themselves accidentally falling for the same girl.

A female treasure hunter and her warrior friend accidentally awaken the spirit of a prince cursed to sleep until he’s awoken by a kiss.

Ophelia After All by Racquel Marie
Genres: Realistic Fiction

Boy-crazy Ophelia is forced to choose between her idealized version of herself and her true self when she develops a crush on a girl.

Bitter is content to live a quiet life, but friendships, new romance, her passion for art, and political turmoil all pull her in different directions.

Georgia didn’t know Todd, the dead boy discovered in the park, but she can’t shake him, or the idea she’s seen him before, from her mind.

Five students selected to be part of an elite writing group set out to change their toxic school environment through their writing and friendships.

Georgia has always wondered why she doesn’t crush the same way as everyone else, but college and new friends help her discover her aroace identity.

There have always been legends of a world below the lake, but when realities begin to blur, two former friends must learn to trust each other again and fix it.

And They Lived… by Steven Salvatore
Genres: Romance, Realistic Fiction

Two boys meet as college freshmen, but their existing issues (like body dysmorphia and internalized homophobia) could threaten their new beginning.

The One True Me and You by Remi K. England
Genres: Romance, Realistic Fiction

Kaylee is at a fan convention and excited to try new pronouns, while closeted Teagan competes in a pageant at the same hotel. They meet…sparks fly.

After having her life’s goal swiped from her by Lara, Sofi must try to prove that Lara’s talent is illegally magical and avoid falling for her in the process.

Newly dumped Blaine runs for student class president against his ex’s new beau, determined to prove that he can be a serious romantic prospect.

Virgil was attacked by a monster, but despite his obvious injuries, no one believes him. Haunted by his trauma, Virgil needs help to prove monsters exist.

She Gets the Girl by Rachael Lippincott and Alyson Derrick
Genres: Romance, Realistic Fiction

Unlikely pair Molly and Alex team up to help Molly get her dream girl (and prove to Alex’s ex that she’s not selfish), but new feelings begin to complicate things.

Though haunted by her past lives, vampire Immy’s burgeoning love for Claudia is unlike anything she’s experienced before. But can a love like that last?

Starring in a K-drama and faking a relationship with her co-star is already overwhelming Hana, but when her ex-BFF joins the show, old feelings reappear.

Life is finally looking up for Sam, but they can’t help diving into the investigation of a mysterious death that happened in their home thirty years ago.

Out of the Blue by Jason June
Genres: Fantasy, Romance

On land for one month, merfolk Crest agrees to help human Sean make his ex jealous, but the line between fake and real dating soon becomes blurry…

Two upper class ladies (who happen to be vigilantes by night) have their lives thrown into chaos by the apparent “suicide” of one of their brothers.

Sy’s (newly ex)boyfriend abandoned him, but after helping a maybe-magic-maybe-just-rich heiress, Sy travels the world to find his ex and win him back.

Benji grew up in an apocalyptic cult and he couldn’t escape before he was made their ultimate destructive weapon. Can he now prevent the inevitable?

A plane Violet’s mom was flying just went mysteriously missing, leaving Violet to navigate the suspicion cast on her mom along with her insurmountable grief.

After accidentally ruining his relationship with his online BFF, musically-gifted Santi moves to California and falls for the aloof drummer in the marching band.

Ordinary Sigrid is apparently a fated leader of the mythical Valkyries, but her destiny is also mysteriously tied to a fallen valkyrie allied with Sigrid’s enemies…

College dropout and magically-gifted taxidermist Laurel returns to her hometown to find increasingly strange and grisly occurrences haunting the land.

Taylor is a finalist for a diverse writers’ internship at SNL, but getting it would mean she would have to come out, both as a hopeful comedian and a lesbian.

This Why They Hate Us by Aaron H. Aceves
Genres: Realistic Fiction, Romance

Bi teenager Quique tries to get over his longtime crush (and best friend) by pursuing other romantic prospects.

Genderfluid Mars attends the Aspen Conservancy Summer Academy in their twin sister’s place after she dies, and soon finds themselves being hunted.

The Feeling of Falling in Love by Mason Deaver
Genres: Realistic Fiction, Romance

After not reciprocating the feelings of his FWB, Neil drafts his reluctant roommate into being his date to his brother’s wedding instead.

Daughter to the Emperor, Raliel, sets out with her (secreted away) demon on her coming of age journey before she is bound to the palace forever.

Teo, a demi-god, must unexpectedly compete in the Sunbearer Trials, a deadly competition usually reserved for gods and in which the loser is sacrificed

Ash and Poppy fall in love, but Ash dies. Now a grim reaper, Ash is only visible to the soon-to-be-dead. But when she sees Poppy again, Poppy can see her too…

Nick is excited to live near his cousin Daisy, but soon finds himself drawn to the neighbor, Jay. Despite their chemistry, he attempts to help Jay win over Daisy.

How to Succeed in Witchcraft by Aislinn Brophy
Genres: Fantasy, Romance

Desperate to impress her drama teacher/the key to a scholarship, Shay agrees to star in her magic school’s musical, despite her academic rival co-starring.

A demon and angel leave their small village to immigrate to America, ostensibly to discover the fate of a baker’s daughter who has stopped writing home.

The Edge of Being by James Brandon
Genres: Realistic Fiction

Longing for connection to the father he never knew, Fig and his boyfriend travel to San Francisco to retrace his father’s steps and learn more about him.

I Was Born for This by Alice Oseman
Genres: Realistic Fiction

A fangirl’s first meeting with her online bff doesn’t go as expected, but her life soon becomes intertwined with the trans member of her favorite boyband.

Three girls, each with unique motivations, join a week long search for the bones of a serial killer, but soon death and dark hallucinations haunt the journey.

Biracial Avery has recently moved to her grandmother’s hometown and struggles to discover her family’s history.

How to Excavate a Heart by Jake Maia Arlow
Genres: Romance, Realistic Fiction

Shani runs into Avery (literally), starting their winter break off on an odd foot, but after getting snowed in together on Christmas Eve, feelings begin to grow.

This is Our Place by Vitor Martins
Genres: Realistic Fiction, Historical Fiction

Three teens in three different decades live in 8 Sunflower St, struggling with growing up and identity while the house watches on.

The Ones We Burn by Rebecca Mix
Genres: Fantasy

Blood-witch Ranka has been chosen to marry a human prince and must choose whether to betray him (and his sister she’s fallen for) like her coven wants.

A Million to One by Adiba Jaigirdar
Genres: Historical Fiction, Adventure, Romance

Four young women form a team to steal a rare and valuable book aboard the Titanic. Can they succeed before time runs out?

Two former best friends are forced to take a family road trip together after discovering at prom that their boyfriends were cheating on them (together).