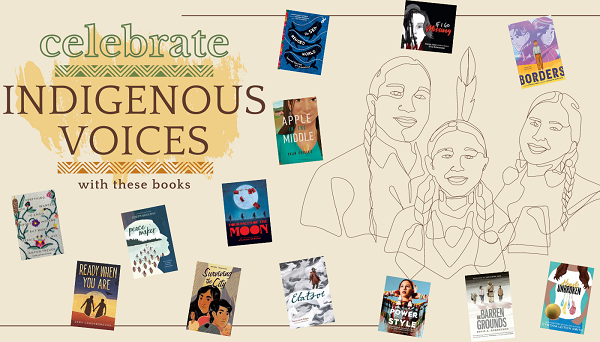 After putting her future on hold to care for her mother, Daunis witnesses a murder and becomes reluctantly involved in an FBI investigation.

After finding a portal to another reality in their foster home, Morgan and Eli must embark on a dangerous journey to save a community from a harsh winter.

Ready When You Are by Gary Lonesborough
Genres: Romance, Realistic Fiction

Jackson’s aunt always visits in the summer, but this year she brings a mysterious boy who forces Jackson to realize things about love, himself, and his life.

How I Became a Ghost: A Choctaw Trail of Tears Story by Tim Tingle
Genres: Historical Fiction, Fantasy

A Choctaw boy tells the story of his tribe’s removal from their homeland, and how their forced exodus led him to become a ghost who can help those left behind.

Indigenous people are hunted and harvested for their bone marrow in a world ravaged by climate change, making Frenchie’s journey to his homelands dangerous.

Apple in the Middle by Dawn Quigley
Genres: Realistic Fiction

Raised by her white father, Apple goes through intense culture shock while visiting her mother’s family on their reservation, but she also grows and finds a home.

In an alternate America shaped by ancestral tradition and magic, Ellie must join forces with ghosts to solve her cousin’s murder.

Okwaho’s tribe and their neighbors have been at war for generations, but after meeting a man spreading messages of peace, Okwaho tries to create unity.

School newspaper reporter Louise must balance covering the drama over her school’s inclusive musical casting with her growing feelings for Joey, the new photojournalist.

On a journey to uncover her family’s history, Spotted Fawn travels through time and space to reclaim her connection to her ancestors, language, and the land.

A boy and his mother become trapped in limbo between the Canadian and American borders when they refuse to report any citizenship other than Blackfoot.

If I Go Missing by Brianna Jonnie
Genres: Nonfiction

An adaption of a letter sent to the Winnipeg Police by a teenage girl in which she urges officials to properly investigate cases of missing Indigenous women.

A 13-year-old Métis girl adjusting to a new home and school accidentally discovers that she can slip back and forth through time.

Two girls try to navigate growing up in the city, until one is told she will need to move to a group home. Devastated, she disappears, leaving her best friend wondering.

An Indigenous Peoples’ History of the United States by Roxanne Dunbar-Ortiz
Genres: History

In a young readers adaptation, Dunbar-Ortiz reveals the roles that settler colonialism and policies of American Indian genocide played in forming our national identity.

An examination of Canada’s past and future relationship with its Indigenous populations and a guide to strategies for reconciliation.

Everything You Wanted to Know About Indians But Were Afraid to Ask by Anton Treuer
Genres: Question & Answer, History

In a young readers adaptation, Treuer sensitively examines Indigenous history and culture through questions and answers in a book that is of value to all types of people.

Apple (Skin to the Core) by Eric Gansworth
Genres: Memoir

Telling his and his family’s story, Gansworth examines Native history and his youth in verse, prose, and imagery and ultimately shatters the slur included in the book’s title.

A collection of the sacred folklore of Indigenous cultures from South and North America.

An eclectic anthology from passionate women that demand change and come together to express the experience of being a Native woman.

What the Eagle Sees: Indigenous Stories of Rebellion and Renewal by Eldon Yellowhorn
Genres: History

An account of the important aspects of Indigenous history, with a particular focus on what Indigenous people did when invaders arrived in their homelands.

The Power of Style by Christian Allaire
Genres: Fashion