This group meets on the second Tuesday of each month at 7:30 pm at the library. Volunteers from among the group lead the discussion, with background materials supplied by the librarian. Each month the current title is available at the Help desk on the main level. New members are always welcome! *This program is currently a hybrid program, meeting in person AND online. If you are interested in attending via Zoom, please click on the registration links provided in the meeting descriptions.

Tuesday, December 13th @ 7:30pm
Zoom Meeting Registration
Against the Loveless World by Susan Abulhawa
As Nahr sits, locked away in solitary confinement, she spends her days reflecting on the dramatic events that landed her in prison in a country she barely knows. Born in Kuwait in the 70s to Palestinian refugees, she dreamed of falling in love with the perfect man, raising children, and possibly opening her own beauty salon. Instead, the man she thinks she loves jilts her after a brief marriage, her family teeters on the brink of poverty, she’s forced to prostitute herself, and the US invasion of Iraq makes her a refugee, as her parents had been. After trekking through another temporary home in Jordan, she lands in Palestine, where she finally makes a home, falls in love, and her destiny unfolds under Israeli occupation.

Tuesday, January 10th @ 7:30pm
Zoom Meeting Registration
The Lincoln Highway by Amor Towles
In June, 1954, eighteen-year-old Emmett Watson is driven home to Nebraska by the warden of the work farm where he has just served a year for involuntary manslaughter. His mother long gone, his father recently deceased, and the family farm foreclosed upon by the bank, Emmett’s intention is to pick up his eight-year-old brother and head west where they can start their lives anew. But when the warden drives away, Emmett discovers that two friends from the work farm have hidden themselves in the trunk of the warden’s car. Together, they have hatched an altogether different plan for Emmett’s future. 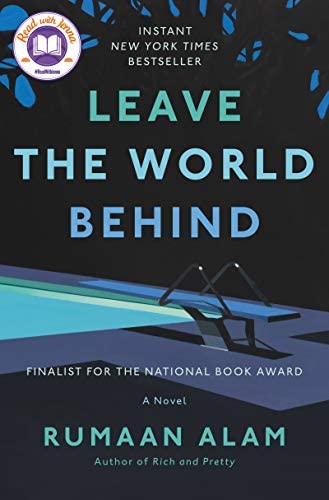 Tuesday, February 14th @ 7:30pm
Zoom Meeting Registration
Leave the World Behind by Rumaan Alam
Amanda and Clay head out to a remote corner of Long Island expecting a vacation: a quiet reprieve from life in New York City, quality time with their teenage son and daughter, and a taste of the good life in the luxurious home they’ve rented for the week. But a late-night knock on the door breaks the spell. Ruth and G.H. are an older couple, it’s their house, and they’ve arrived in a panic. They bring the news that a sudden blackout has swept the city. But in this rural area, with the TV and internet now down, and no cell phone service, it’s hard to know what to believe. Should Amanda and Clay trust this couple, and vice versa? What happened back in New York? Is the vacation home, isolated from civilization, a truly safe place for their families? And are they safe from one other?