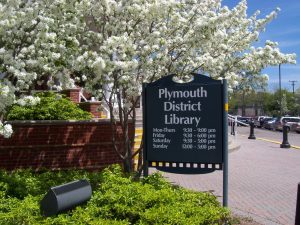 For the first 58 years of its existence, beginning in 1923, the Plymouth Dunning-Hough Library operated as a branch of the Wayne County Library. The county system enabled new and growing communities in suburban Detroit to establish professionally run libraries: The local community provided a suitable building, and the county supplied the trained staff and management, with the cost of the operation gradually shifting from the county to the local community.

The Library was initially housed in the Plymouth Village Hall, but soon moved into rented
space in a building at 206 Main St, later known as the Joliffe Building. By the early 1940’s this space
was overcrowded, and library officials searched for a new location for a permanent facility.
Discussion centered on the Burgess House at 223 South Main, a large frame residential property, part of the estate of Kate E. Allen, which had been used as offices by the Road Commission.

In 1945, a multi‐year lease was negotiated, and the library was relocated. However, discussion continued about a longer term solution not involving rented space. Finally, in 1947, Mrs. Bessie Dunning and her daughter, Margaret Dunning, offered to purchase the Burgess House and donate it to the City of Plymouth as a permanent home for the library. A vote of the citizens of Plymouth was required to enable the City to accept the gift, and on April 7, 1947, the proposal was approved by 88% of those voting. In honor of the gift, the library was officially named the Dunning Library.

Library usage continued to increase in the new facility, and in the early 1950’s an overall plan was developed to enlarge the facility and replace the increasingly dilapidated house. Byron Becker, of the Detroit architectural firm, Wheeler and Becker, designed the new facility. In 1953, City funds and donations were used to construct the 2,400 square foot, one story addition to the rear of the house, but the City could not raise sufficient funds to replace the Burgess House, itself. In 1957, the Edward C. Hough and Mary Hough Kimball Foundation donated funds to complete the project. Records note that Mr. Hough selected the colonial facade from the two options presented by Mr. Becker. The 6,000‐plus square foot building was re‐dedicated in March, 1958, as the Dunning‐Hough Library. 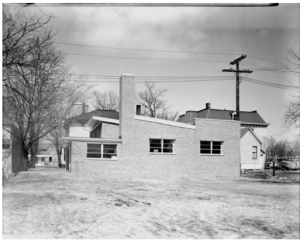 In December, 1980 an advisory board, the Plymouth Library Commission, was formed to give input into the Library’s operation. Two appointees from Plymouth Township, two from the City of Plymouth, and one representative from Canton Township comprised the Board. In July, 1981, the Library was re‐organized as a department of the City of Plymouth, with contractual arrangements to continue to serve Plymouth and Canton Townships. The advisory Board was maintained, but under the terms of State Law, an elected Library Board was established, consisting of five elected City residents. In 1982, Canton Township organized its own Library and terminated its support of the Plymouth Library.

After years of heavy use, there was continued concern that even after the withdrawal of Canton, the 7,000 square foot Dunning‐Hough Library was not large enough to properly serve the City and Township of Plymouth. The Library applied for a Federal grant to expand the building. In 1983, the City of Plymouth was awarded a $200,000 Federal Library Services and Construction grant, to be matched by $425,000 provided by Building Authority bonds, to construct a 6,000 square foot addition extending the rear of the building into the East Central Parking lot. The enlarged and renovated Dunning Hough Library was rededicated in November, 1984, with a speech by Margaret Dunning.

The enlarged facility and library operation made additional demands on City and Township funds. Officials sought alternative ways to support public library services, and, after months of study, Mary B. Childs and Esther Hulsing spearheaded a campaign to reorganize the City Library as a District Library B a method that allowed for independent operation of the Library by a Board of Trustees elected at‐large from the City and Township with a district‐wide millage to support it. The formation of the Plymouth District Library was approved and its first Board of Trustees was elected by the voters of the City and Township in September, 1985. In November, the voters approved a 1.5 mill property tax levy to support the Library in perpetuity, and on January 1, 1986, the Plymouth District Library began operation.

Stable and improved tax support allowed the Library to purchase more materials and improve services. In November, 1987, voters approved an additional .4 mill tax to enable the Library to expand operation from 5 days to 7 days a week, and the add staff for the expanded operation. In January, 1988 the Library added Friday and Sunday hours. 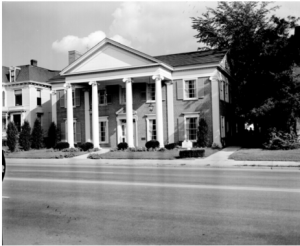 In 1991, the Library Board, with increasing pressure for space for materials, programs, and reader seats, undertook a space needs study with a goal of providing for the long‐term facility needs of the Library. In 1994, voters approved a $7.35 million bond issue to build a new 42,000 square foot facility on the site of the Dunning-Hough Library.

In June, 1996 the operation moved to temporary quarters at a former grocery store building at 705 South Main Street, and in April, 1998, the new Dunning-Hough Library opened for business. The building project included the acquisition of several houses on Union Street and reconfiguration of Church Street; and the new 2 story facility included unfinished “attic” space for future expansion. The project architect was Merritt McPherson Cieslak of Farmington Hills, MI and Ellis Don was the construction manager/g.c.

Over the next 8 years library circulation increased from approximately 450,000 per year to almost 950,000 per year. In 2006-7, an expansion and renovation program provided for the build-out of 10,000 additional square feet of space on the upper level and the entire building was reorganized and updated.

This article was written by Kathy Petlewski, MA, MLIS in 2016