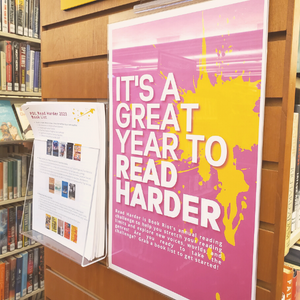 Our Read Harder booklist is back by popular demand! Read Harder is Book Riot’s annual reading challenge to help you stretch your reading limits and explore new voices, worlds, and genres. How you approach Read Harder is up to you: you might choose to read one book per task, or feed a few birds with one scone and count one book for multiple tasks. The point of the challenge isn’t to do the thing one specific way, but rather to to push yourself outside of your comfort zone. You can grab a paper copy of this list and a reading log on the main level at the library.

1. Read a novel about a trans character written by a trans author.
An Unkindness of Ghosts by Rivers Solomon
Dreadnought by April Daniels
The Thirty Names of Night by Zeyn Joukhadar
Light From Uncommon Stars by Ryka Aoki
Different Kinds of Fruit by Kyle Lukoff

2. Read one of your favorite author’s favorite books.
Winesburg, Ohio by Sherwood Anderson (recommended by F. Scott Fitzgerald and Tom Perrotta)
Unaccustomed Earth by Jhumpa Lahiri (recommended by Yaa Gyasi and Lily King)
The Assistant by Bernard Malamud (recommended by Donald Barthelme, Jonathan Franzen, Philip Roth, and Heidi Julavits)
Go Tell It On the Mountain by James Baldwin (recommended by Joan Didion, Yaa Gyasi, and Brit Bennett)
You can also check out toptenbooks.net, which has a long list of various author Top Ten lists.

3. Read a book about activism.
Revolution in Our Time: The Black Panther Party’s Promise to the People by Kekla Magoon
It Was Vulgar & It Was Beautiful: How AIDS Activists Used Art to Fight a Pandemic by Jack Lowery
Our History Is the Future: Standing Rock versus the Dakota Access Pipeline, and the Long Tradition of Indigenous Resistance by Nick Estes
When They Call You a Terrorist: a Black Lives Matter Memoir by Patrisse Khan-Cullors
Year of the Tiger: An Activist’s Life by Alice Wong

4. Read one of the most-challenged/banned books of the year by a queer and/or BIPOC author.
Gender Queer by Maia Kobabe
All Boys Aren’t Blue by George M. Johnson
The 1619 Project: A New Origin Story by Nikole Hannah-Jones
The Kite Runner by Khaled Hosseini
Beloved by Toni Morrison

6. Finish a book you’ve DNFed (did not finish). (Listed: most common books shelved DNF on Goodreads)
The Invisible Life of Addie LaRue by V.E. Schwab
The Night Circus by Erin Morgenstern
Red, White & Royal Blue by Casey McQuiston
The Song of Achilles by Madeline Miller
A Court of Thorns and Roses by Sarah J. Maas

9. Read an independently published book by a BIPOC author.
All You Can Ever Know by Nicole Chung
Moon of the Crusted Snow by Waubeshig Rice
She Would Be King by Wayétu Moore
Night of the Living Rez by Morgan Talty
The Hurting Kind by Ada Limón

10. Read a book you know nothing about based solely on the cover. We found our suggestions on NPR’s Books We Love webpage (https://apps.npr.org/best-books/)
Emergency Contact by Mary H.K. Choi
We Cast a Shadow by Maurice Carlos Ruffin
Eat a Peach by David Chang
At Night All Blood is Black by David Diop
Fuzz by Mary Roach

12. Read a nonfiction book about BIPOC and/or queer history.
The Color of Law: a Forgotten History of How Our Government Segregated America by Richard Rothstein
From a Whisper to a Rallying Cry: The Killing of Vincent Chin and the Trial that Galvanized the Asian American Movement by Paula Yoo
Queer Country by Shana Goldin-Perschbacher
Indigenous Continent by Pekka Hämäläinen
El Norte: The Epic and Forgotten Story of Hispanic North America by Carrie Gibson

13. Read an author local to you.
American as Paneer Pie by Supriya Kelkar
Abbott by Saladin Ahmed or available via Hoopla
Scotsman in the Stacks by Alana Oxford
Shadows Over London by Christian Klaver
Beautiful Music by Michael Zandoorian

14. Read a book with under 500 Goodreads ratings.
Come Home, Indio by Jim Terry
Making Love with the Land by Joshua Whitehead
We are Bridges by Cassandra Lane
Last of Her Name by Mimi Lok

15. Read a historical fiction book set in an Eastern country.
Beasts of a Little Land by Juhea Kim
Moth by Melody Razak
The Garden of Evening Mists by Twan Eng Tan
A Thousand Steps Into Night by Traci Chee
Omar Rising by Aisha Saeed

16. Read a romance with bisexual representation.
The Gentleman’s Guide to Vice and Virtue by Mackenzi Lee
Take a Hint, Dani Brown by Talia Hibbert
Mistakes Were Made by Meryl Wilsner
This is Why They Hate Us by Aaron Aceves
You Made a Fool of Death With Your Beauty by Akwaeke Emezi

17. Read a YA book by an Indigenous author.
A Snake Falls to Earth by Darcie Little Badger
The Marrow Thieves by Cherie Dimaline
The Firekeeper’s Daughter by Angeline Boulley
Imaginary Borders by Xiuhtezcatl Martinez
Man Made Monsters by Andrea L. Rogers

19. Read a nonfiction book about intersectional feminism.
Against White Feminism: Notes on Disruption by Rafia Zakaria
We Should All Be Feminists by Chimamanda Ngozi Adichie
Can We All Be Feminists? By June Eric-Udorie
Our Stories, Our Voices: 21 YA Authors Get Real About Injustice, Empowerment, and Growing Up Female in America edited by Amy Reed
Bad Fat Black Girl: Notes from a Trap Feminist by Sesali Bowen

20. Read a book of poetry by a BIPOC or queer author.
Postcolonial Love Poem by Natalie Diaz
I Am The Rage by Martina McGowan
Don’t Call Us Dead by Danez Smith
Time is a Mother by Ocean Vuong
Say Her Name by Zetta Elliott

21. Read a book of short stories.
Things We Lost in the Fire by Mariana Enriquez
Heads of the Colored People by Nafissa Thompson-Spires
Our Shadows Have Claws edited by Yamile Saied Méndez and Amparo Ortiz
What it Means When a Man Falls From the Sky by Lesley Nneka Arimah
Homesick For Another World by Ottessa Moshfegh

22. Read any book from the Ignyte awards shortlist/longlist/winner list.
Black Sun by Rebecca Roanhorse
Vagabonds by Jingfang Hao
A Master of Djinn by P. Djèlí Clark
Black Water Sister by Zen Cho
The City We Became by N.L. Jemisin

23. Read a social horror, mystery, or thriller novel.
Mexican Gothic by Silvia Moreno-Garcia
The Only Good Indians by Stephen Graham Jones
White Tears by Hari Kunzru
Frankenstein in Baghdad by Ahmad Saadawi
White is For Witching by Helen Oyeymi